Last weekend when it was a bank holiday we didn’t go on holiday at all, so I was a bit bored by Sunday. My Dad took us to a thing called a Steam Fair, which was in the countryside and had rides, horses, ferrets and stalls you could buy things from.

I went on a round and round ride like they have at the seaside; I wanted to go on the motorbike but it was ever so big so half way through the man came and moved me onto a smaller car. I was still a bit scared though.

Me and Daddy also went on a little stream train, it went backwards and forwards up the track and our dog Doodle chased us and barked a lot! 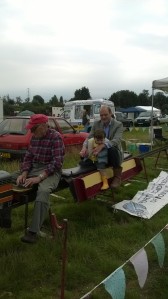 Then my Dad suggested we have a look at an old fire truck, which was cool except for I got stung by a mean and nasty wasp! 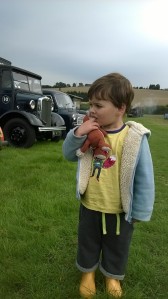 It just buzzed right by and stung me on the ear! I had to go to the ambulance tent and they put a magic ice pack on it.

After that my Dad got me an ice cream to make it all better. My brother got one too, even though he didn’t get stung and wasn’t brave at all.

After that we watched the heavy horse show, there were lots of horses as big as dinosaurs…

My Dad let us get something from the stalls each with our pocket money. I got a crane (which cost more than my pocket money) so Daddy bought it for me and I bought a toy ice cream van for my brother Drum.