It was super warm in London last night and Daddy decided to take me to the West End.

I’m not the biggest fan of going on the tube but I do like reading the Evening Standard..

Obviously it’s just as much fun to rip up too…

First we went to a new place which is called the Tanqueray Botanical Gin Garden and is like a garden indoors. I’m not allowed gin but Mummy said yesterday was National Martini Day, so I had water in my tippee cup and pretended.

The manager brought me some super nice bread which was still warm so that means they just baked it. 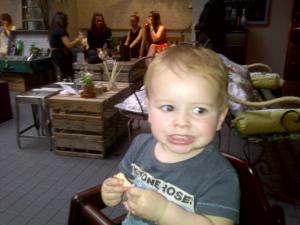 I did a bit of flirting with those girls you can see behind me. Am quite a dab hand at the old ‘wink and wave’ technique, but my Dad says it’s not very subtle.

Afterwards we went to a place called Sanctum hotel, which also has a garden that isn’t outside (what is it with these weird people who don’t like outside gardens?). My Dad had a drink called a Mojito which smells like toothpaste and the bar lady filled up my tippee cup with proper grown up water from the bar! Best thing was I managed to push my bedtime back a whole hour to 9pm! #Result