Fri 07 June 2013: How I was nearly sick on Rizzle Kicks and Neneh Cherry

My friend Garfield runs a place called The Birdcage on Columbia Road. It was his birthday last night and an 80s lady called Neneh Cherry was playing. There were also some other people there you might have heard of like Jordan from Rizzle Kicks and Miquita Oliver.

You might remember from yesterday that I’ve been a bit grumpy and poorly from my MMR jab. Well last night I decided to be a bit sick too.

Luckily I was sick outside The Birdcage and also in the taxi, so Rizzle Kicks remained unscathed.

I had a nice kip on the sofa tho, it was leathery soft… 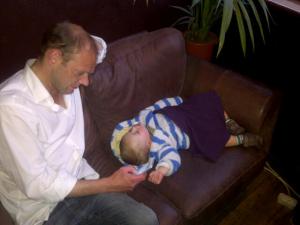