On Saturday I met a very cool LA rock band called Them Guns, who were visiting London. My Daddy served them Haggis and single malt whisky, cos they had never had it before. 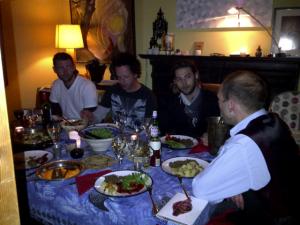 This is my Dad with the singer Navarone Garibaldi, who apparently has eight snakes back at home! You can read about him on Janet Charlton’s Hollywood site.

On Sunday it was a super hot day for this time of year and I played in the garden all day. First of all (before breakfast) me and Huckle played Tag and then I did some servicing on my car cos I might have a race with my pal Joel later. Then me and the dogs stocked up the wood pile cos you can never be sure when you might need a good stick…

After that Daddy made a fire outdoors and I stayed up super late. And I don’t just mean sneaking in an extra ten minutes at story time, I mean HALF PAST NINE PM!